Whatever you imagined right now, please stop imagining it. This job, in fact, is all about determining the sex of newly hatched chickens. Large poultry companies need to separate the female chicks they need for egg production from unwanted male chicks. The difference between the two is virtually unnoticeable in the early days, so this is where professional chicken sexers come in.

The process of sexing a chicken is – well, it’s almost as fun as it sounds, and we’ll leave you to look it up by yourself. Just know that it involves a bucket and (occasionally) something called chicken sexing machine. By the way, there is a constant shortage of people willing to go into this line of job, so this might be your chance to start earning $60,000 per year. 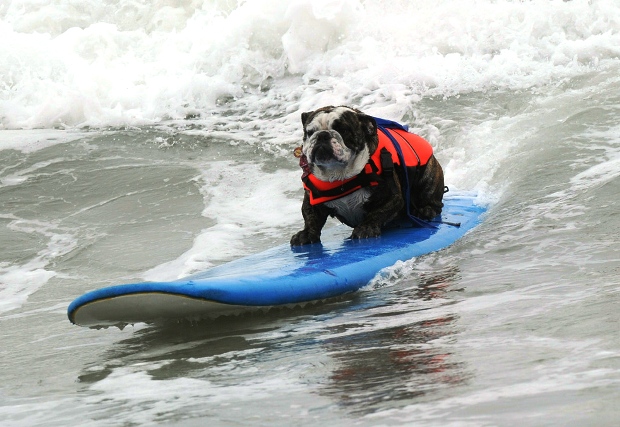 These are the people who are always ready to teach your dog some sweet tricks on the surfing board. Dog surfing lessons are available at many resorts, and their purpose is for both owner and dog to strengthen their bond while having fun in the water. For those of us who, you know, believe that a dog’s idea of fun is no different from theirs.

This sounds like a very weird job indeed, but as long as there are customers – dog surfing instructors will strive. And there will always be customers, because let’s face it: the coolness factor of having a surfing dog is over the board (pun totally intended.)

A hotel in Finland once put out an ad for “professional sleepers” when they wanted someone to test the comfort of their rooms and blog about it. They must have received a lot of offers!

Also, there was that time when an art exhibition in Ukraine called for “sleeping beauties” (being kissed was part of the job, too.) There was an actual clause in their contract saying that if the woman opened her eyes during the kiss, the pair had to get married. As far as we know, no marriages ever happened there.

For those times when you really want to make history as the first person to purchase the new iPhone, but have to be working a shift at McDonalds when it goes on sale, professional line standers step in. These people will wait in line instead of you, be it rain or storm, freezing cold or a plague of locusts. They will charge you accordingly, too, but surely $45 is not too big of a price for two hours of bad weather, boredom and jostling that someone else is ready to endure instead of you?

What’s great about this particular weird job is that with enough motivation just about anyone can become a line stander. It requires no special skills at all – except for those needed to properly spread the word of your services. And good stamina, most probably.

Someone, after all, needs to make sure the new products introduced by pet food companies are up to Fido’s standards. Since pets haven’t learned to comprehensively express their opinion yet, people have to do it for them.

Most of the time, however, pet food tester’s job consists of planning and writing reports, because these people are also responsible for the product’s nutritional value. Oh, and they don’t usually swallow the food. Only when they really like the taste.

If you have a secret passion for stroking strangers’ faces, this might be a job for you. A face feeler is a person who evaluates the effect of various skincare products, in a very hands-on way. A typical day in their life includes studying the effects the same product has on a broad selection of consumers by putting their hands all over said consumers’ faces.

Next time you see an ad for a moisturizer that promises to make your skin “baby-smooth”, know that someone somewhere spent two hours fondling various people’s faces to come to that conclusion. And some baby butts as well, probably – just to have basis for comparison.

This is a common profession in Japan. Train pushers (or oshiya, as they are called) work subway stations during rush hour to help passengers fit into the train. These guys were first introduced at the Shinjuku station – the busiest transport hub in the world, according to Guinness World Records. Now they can be seen at all major train stations in Tokyo.

Naturally, the main requirement for an oshiya is physical strength. It is said that they are usually recruited from the ranks of former sumo wrestlers. They also need to move fast enough to work two doors of the same car. Not a good job for a couch potato!

Imagine that you have moved to a new city and have no one to show you around. Or maybe you want to practice a hobby that none of your friends share. Or you happen to have a spare ticket to a match and don’t know anyone who roots for the same team. In times like these, friends for hire come to the rescue!

The idea sounds kind of doubtful at first, but after you think about it you really start seeing the sense. Because, let’s admit it, there are times when we all wish we could simply pay people to be our friends. And signing a contract that protects you from backstabbing is a definite plus.

Japan seems to be the source of many a weird job, including what must be the sorriest job in the world (hah!). The Japanese are known to be very formal when it comes to business relationships, so they traditionally employ special people to express regret and make amends on their part.

Nowadays, however, similar jobs exist at customer support departments of large companies all over the world. The “apologizers” are hired to write apology emails, offer discounts and ask for customers’ feedback on problematic issues.

Yep, this is a real thing. Just like dog food and skincare products, paint needs to be tested – and one of the factors that have to be assessed is its behavior during the drying stage.

Here is how it’s usually done: the watcher puts a bit of paint onto a surface (could be a wall, could be a piece of cardboard) and uses a stopwatch to measure the drying time. All the while the sample has to be monitored for changes in color, texture, etc. The job is probably a bit boring, but those in the know say it pays really well.