German shepherds are the standout model dog in your neighborhood.

And you’ve probably seen them around. They’re the second most popular dog in the US (7 years in a row according to AKC), only to be outdone by the Labrador Retriever.

They’re easily recognizable for their beautiful coat colors of black, tan, gold, and deep red. However, German shepherds colors and patterns come in a much wider variety. Everything from stunning solid black, to pure snow white, and everything in between.

So when we look for other dogs that resemble this mighty breed we can cast a wider net.

What we’re looking for is some of the trademark physical features; the pointed and alert ears, the long powerful stature, their long snout, and deep brown eyes. 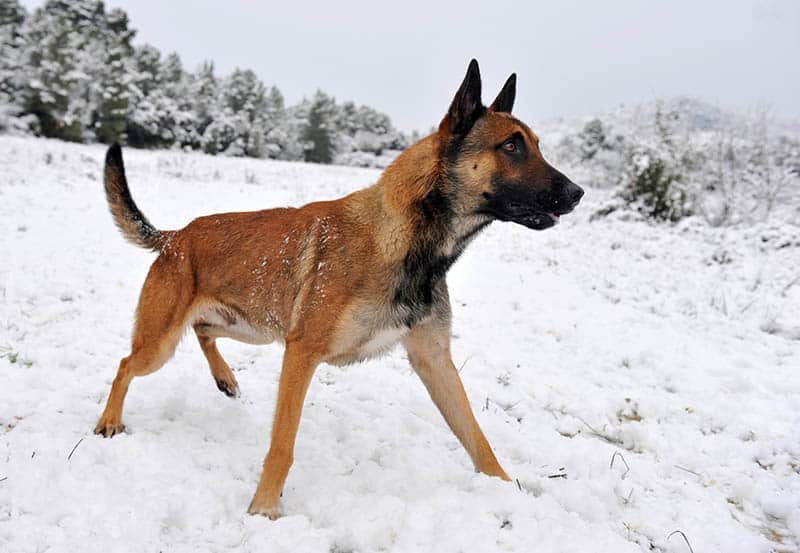 We’ll start with the most obvious, the Belgian Malinois.

This breed is often mistaken for a German Shepherd, however there’s a few distinct differences. Malinois have short hair, are smaller in weight and size, and usually have a fawn colored coat with a black mask.

Malinois’ are very high energy dogs yet they can be especially sensitive to scolding.

While they’re incredibly intelligent they can also be a lot to handle (especially for busy families). They require constant positive training, exercise, and socialization to excel.

The Dutch Shepherd is an active herding dog that has been around for over 100 years, but still closely related to the German Shepherd (hence the resemblance).

One striking difference is their beautiful brindle coat. But just like most dogs on this list, they’re heavy shedders and require a lot of brushing.

There are some differences in personality however. Dutch Shepherds are said to be easier to train and socialize than their cousins. They adapt well to family life and are overall a very friendly companion.

They are, however, incredibly alert and energetic. You may find their energy difficult to manage. Overcoming their need for daily strenuous exercise is one of the main challenges of owning a ‘Dutchie’.

Dutch Shepherds are a less common sight than their German counterparts, but are quickly gaining popularity. 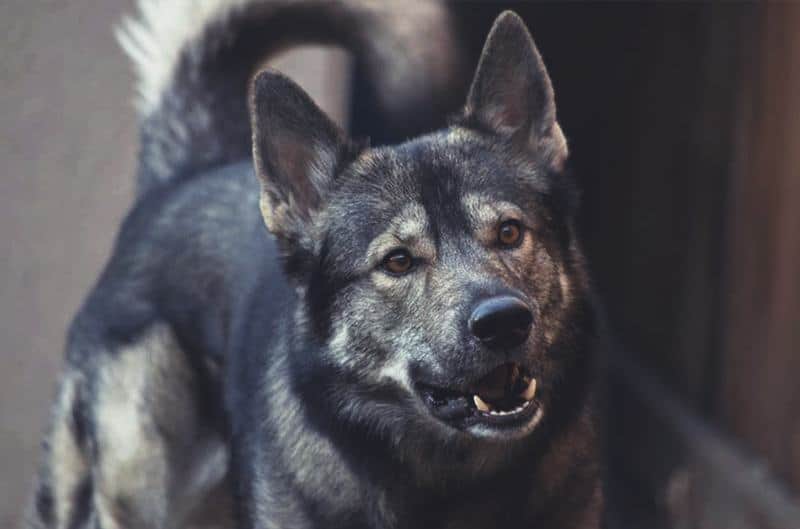 Tamaskans are a dog breed designed to look like wolves, but with the temperament of a dog.

They’re a crossbreed between Huskies, Malamutes, Czechoslovakian Wolfdogs, and German Shepherds. Officially recognized as a breed in 2013, this once rare breed breed is now quickly becoming a more common sight.

Their surge in popularity has also lead to unethical breeding practices. Be informed on adoption to ensure the health and safety of your pup. 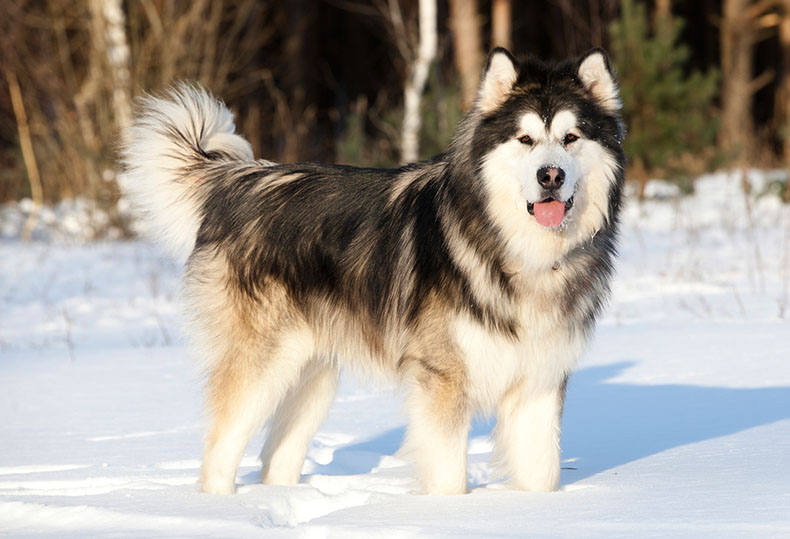 The Alaskan Malamute is a work horse (or canine if you prefer). They were bred for pulling heavy loads through harsh arctic conditions. Which explains their pure size and muscle.

Malamute owners will often tell you about their stubbornness. These dogs require a lot of training and patience to fit into your typical family.

These are a working breed, and if they don’t have a daily outlet for their extreme energy they’ll quickly become bored and destructive. 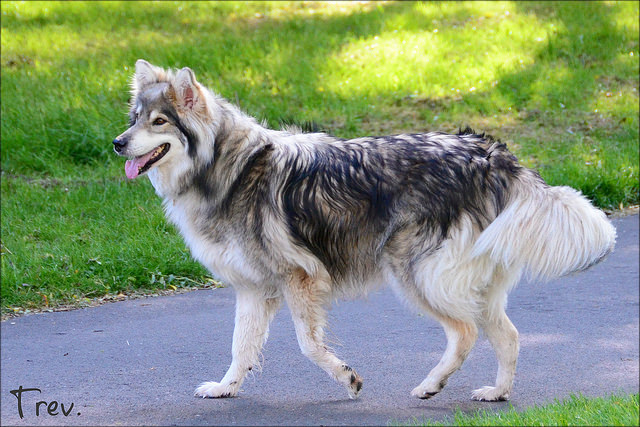 Utonagan is a newer crossbreed, introduced to the UK in the 1980’s, which is a mix of Malamute, Siberian Husky, and German Shepherd.

Similar to a German Shepherd temperament; they are curious, affectionate, loyal, and playful, but require daily training and exercise. They have plenty of personality, and are very receptive to their owners.

Utonegan’s are energetic, so they need to run and require mental stimulation. Their free roaming instinct is very much alive so they are best suited for large living spaces and acreages. 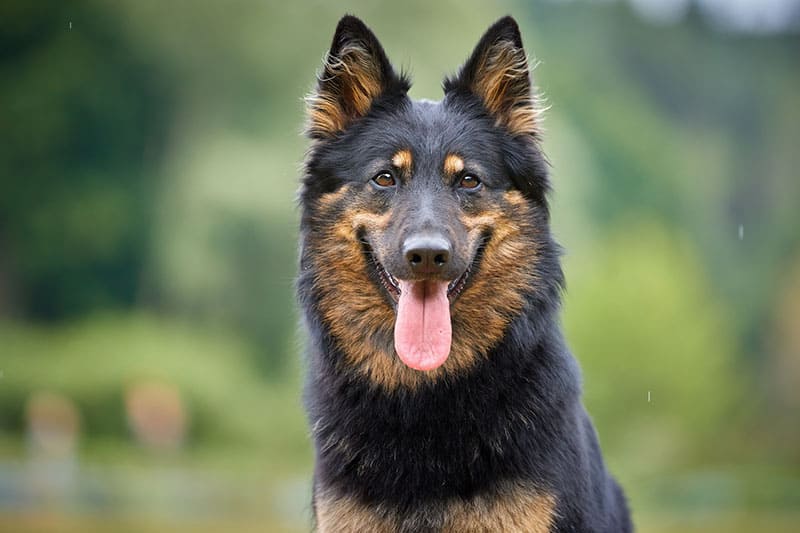 The trademark Black and Tan coat colors and deep brown eyes make this a close resemblance to the German Shepherd. However, you may find this breed smaller in size and with their own distinct personality.

Bohemiam Shepherd’s have been around a long time, since the 1300’s in fact. And have since retired from herding and guarding to a much more relaxed family life.

While still high energy and alert (and make excellent watch dogs) they are often content to relax with loved ones.

These shepherds are incredibly intelligent and high energy – which means they get bored easily. And when shepherds get bored they get destructive. Daily strenuous exercise and training will keep your dog content and out of trouble. 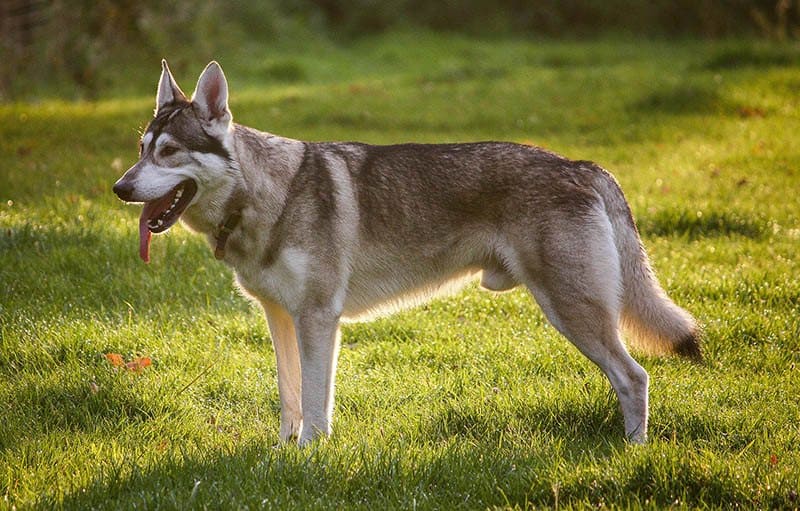 Northern Inuit Dogs were an attempt to create a wolf-like breed with the temperament of a dog.

However, they share similar physical characteristics of a German Shepherd. It’s speculated this ​dog originates in the UK during the 1980’s, by mixing Malamute, Siberian Husky, and (of course) German Shepherds.

They gained main stream popularity from the series Game of Thrones, where the characters from the Stark family comes across a litter of “wolf puppies”, which were actually Northern Inuit dogs.

These dogs require daily training and patience; as their high energy, intelligence, and overall intensity demands it. They also have extreme separation anxiety, which can lead to destructive behavior.

As you may have guessed, Northern Inuit Dogs can be a challenging breed and are not recommended for the novice dog owner. 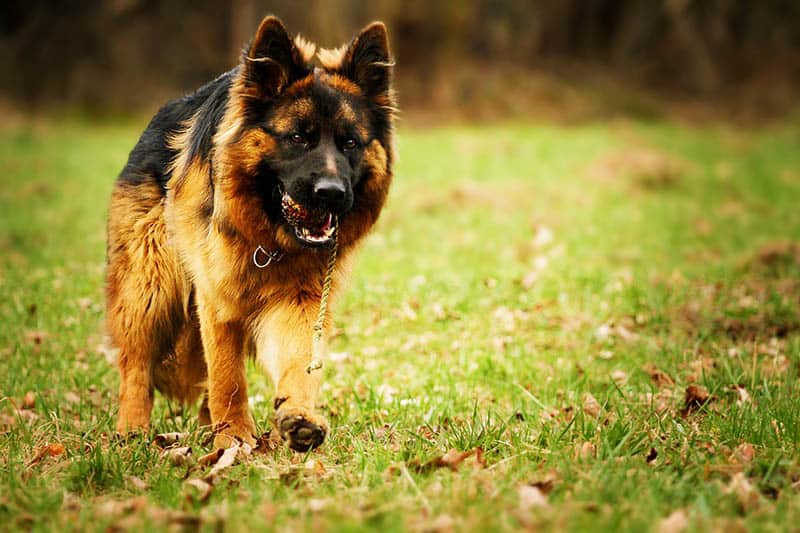 You would be forgiven for mistaking this dog for a German Shepherd. But the word “King” is no exaggeration.

While they certainly share many of the same qualities. The big difference comes in sheer size, as the King Shepherd weighs up to 150 pounds, and stands about 30 inches tall.

The King Shepherd is essentially a mixed breed. They’re thought to be mixed with Great Pyrenees, Alaskan Malamute, and Akita. And they’re not officially recognized by the AKC as a breed.

Despite the tough-guy look, these are gentle giants. While protective and alert, King Shepherds are not known to be aggressive. They’re intelligent and eager to please, which makes them excellent with training. 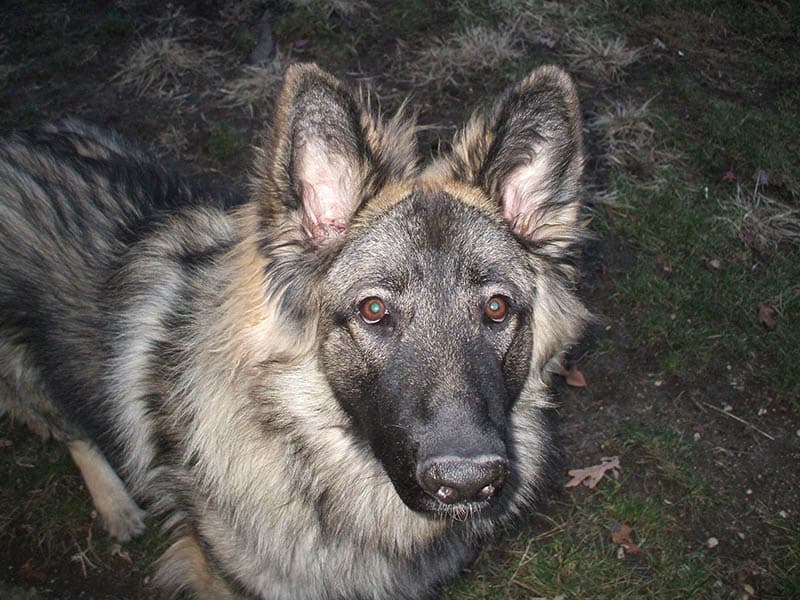 Again, this is a mixed breed featuring German Shepherds, which also include Alaskan Malamute (hence the long, thick coat).

These are very much a working breed. While highly trainable, Shiloh Shepherds require strenuous daily exercise and mental stimulation to keep them content.

You can often find Shilohs working with police, military, search and rescue, and other specialized training.

Despite their workman attitude, the Shiloh absolutely loves attention and play time. If you can accommodate their daily needs, they will happily become a wonderful addition to your family. 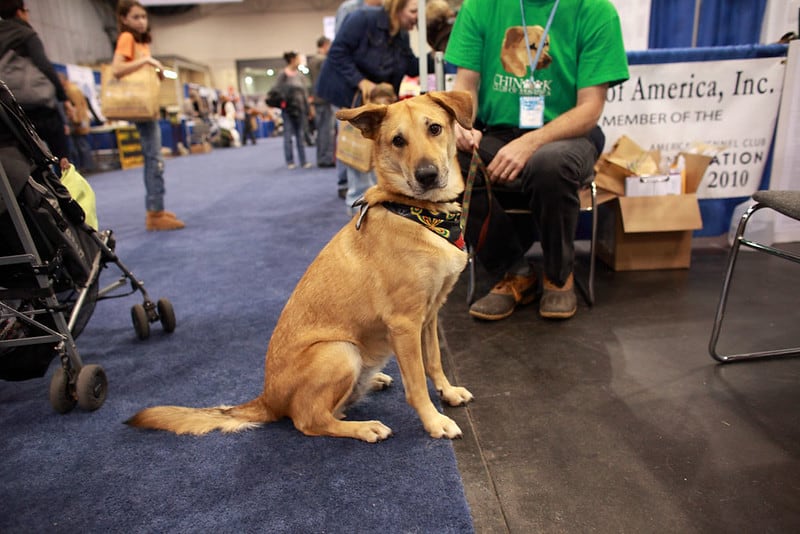 The resemblance to a German Shepherd is admittedly a bit weaker here. Simply because the ears are not pointed. However, the size, structure, muzzle, and coat (length and color) lend itself to some similarities.

They’re also worth mentioning because they’re just a wonderful dog. Chinooks are sweet, compassionate, and caring.

You may find, however, that Chinooks are incredibly energetic and get bored easily. And a bored dog can become destructive (noticing a recurring theme in this list?)

Daily walks and training are essential for the Chinook. 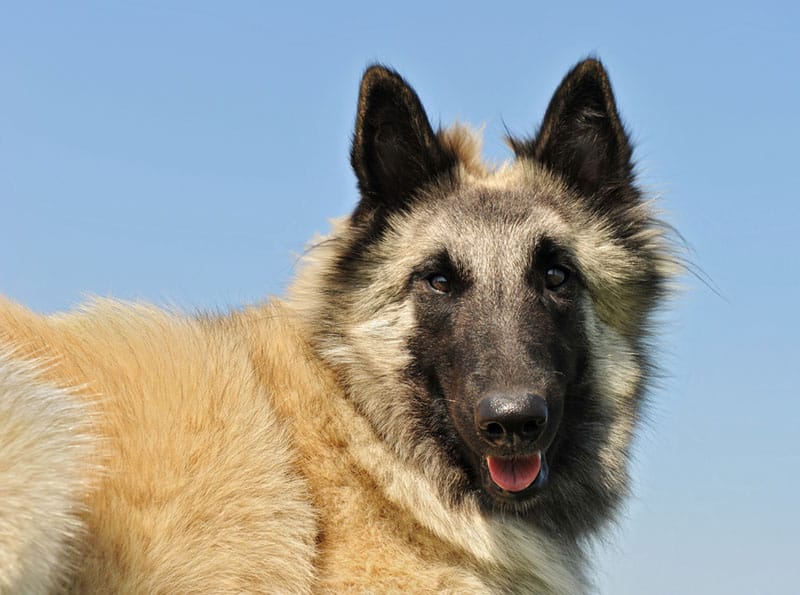 The Belgian Tervuren are incredibly sharp dogs. They have no shortage of intelligence and wits. That does, however, make them bored easily. Daily walks, training, and mental stimulation are essential to curb bad behavior.

Tervurens are a sensitive soul. While they may find ways to get into trouble (especially if they’re bored) they don’t respond well to scolding. And they absolutely do not like being left alone.

This breed excels when given a ‘job’. It’s no wonder you can often find the Belgian Tervuren in the line of duty with police, search and rescue, tracking, or agility courses. 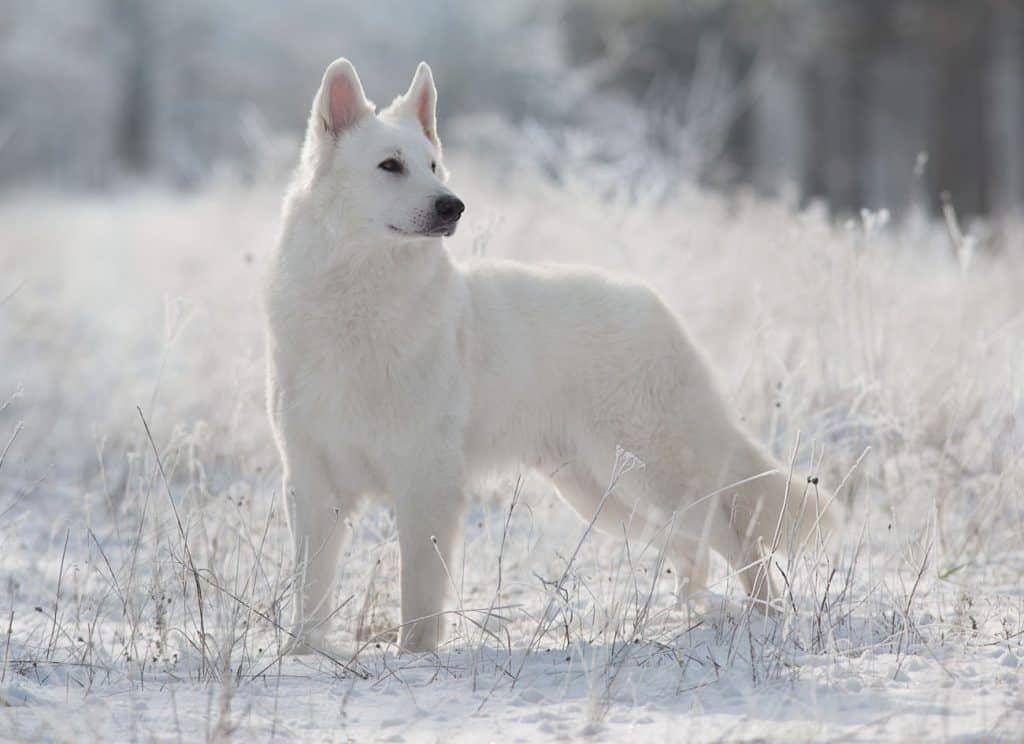 This gorgeous breed is quite closely related to the German Shepherd. In fact, you could argue they are one in the same.

Because of their striking difference in appearance (and for a short time it was believed white-coated German shepherds were inferior) their variety was given a different breed name. However, they soon gained popularity in the US, Canada, and Switzerland.

While they share many of the characteristics of a German Shepherd, it is generally said the White Swiss Shepherd is a little bit better behaved. They tend to be more eager to please. However, they may also be more sensitive, and do not respond well to scolding.