Crossbreed dogs are selectively bred between two or more recognized dog breeds. The trend started in the late 20th century when breeders began crossing purebred poodles with other purebred dogs to obtain the poodles’ hypoallergenic coat and traits from the other dog’s breed. While the puppies resulting from a mix of purebred dogs will have characteristics of both breeds, there is no uniform standard appearance for the puppies of a particular mix of purebreds. This has resulted in a wide range of different appearances in puppies, ranging from the cute to the comical. Crossbreeds are called by a portmanteau word, which is composed of parts of the parents’ purebred breed names, leading to an endless range and complexity of names.

The Pitsky brings together the resilience and gaminess of the powerful American pit bull with the pulling-power of the (Siberian or Alaskan) Husky. This cross combines the chiseled muscle of the former, with the intelligence and wolf-like appearance of the latter. It gives the Pit Bull a softer and more feathered appearance due to the longer haired Husky genes. It does, in all honesty, make for a rather odd combination in terms of appearance. However, this is a hardy dog, which is reputed not to bark much, and which makes for a good family pet, being both playful and gentle mannered. With such an athletic and strong build, it should come as no surprise that this dog needs at least two hours’ exercise in order to stay fit and healthy, and more importantly to make good and constructive use of its great reserve of energy. 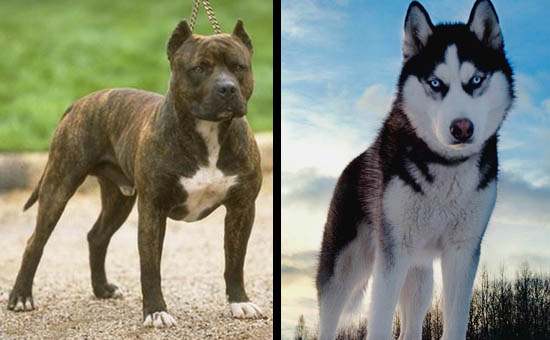